Koudelka Wristwatch & The Invasion of Prague 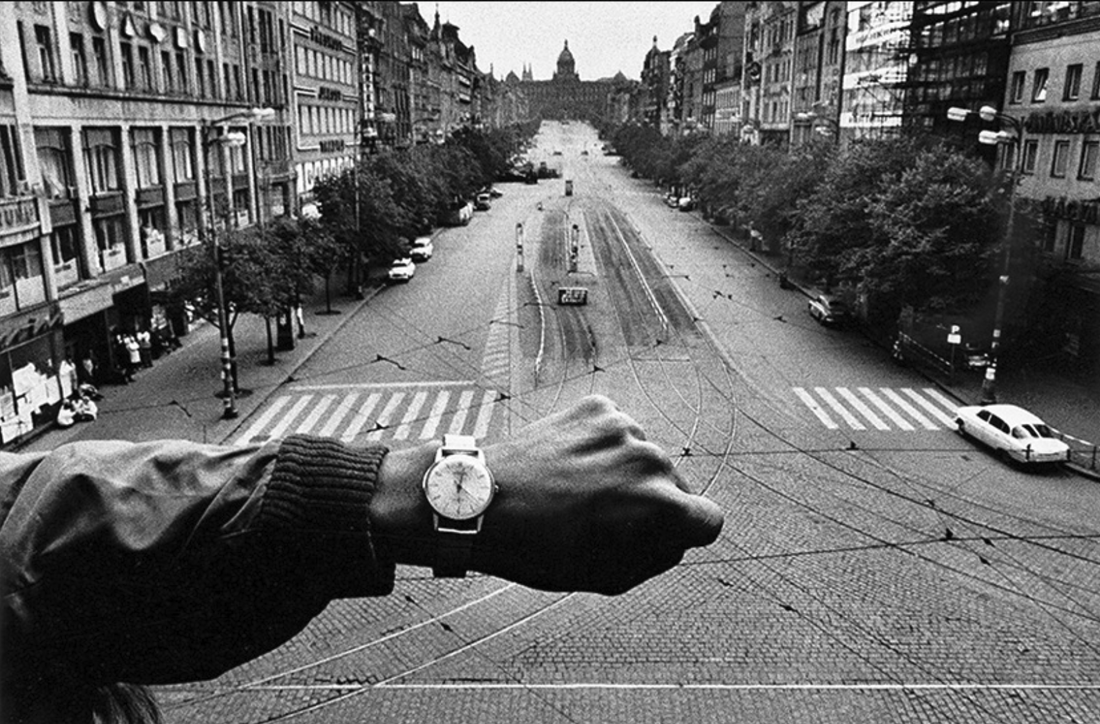 Koudelka is one of my favorite photographers, but not throughout his photographic career.  There are projects he has done which impress and move me greatly while other projects just does not work for me. This image, one of his more famous ones, is a powerful image but my no means his best image. But today we will focus on this particular image.

To understand this image, we need to take a quick peek at the photographer and where he was at this point in his life. He is an engineer by training and was working as an engineer for many years (around 7 or so).  He quit engineering to become a photographer, which sounds easy but in reality Czechoslovakia was a communist state (with a friendly face) which required him to request permission to change his job from Engineer to Photographer.  It took him some time to be accepted into the Photography community and receive permission to become a full time photographer.

He had been out taking pictures of what then was called "Gypsies" as he had built up a relationship with them through a shared interest in music. He had returned to Prague and was told of the invasion of Czechoslovakia before the tanks rolled into Prague. At the time he was shooting a Exacta Varex IIa with a Flektogon 25mm lens.  He was one of the first people to purchase this lens when it was made available in Czechoslovakia and he used it when photographing inside the small houses of the "Gypsies".

This experience, shooting with a wide angle lens in small houses with poor light taught him a few important things that would come to play int he image above and many subsequent images of the invasion.  The first is that it taught him to "see wide".  He credits this lens with changing his perspective on composition.  The second, he began shooting a 400 ISO rated film and pushed it to 1600 and even 3200 ISO.  This was needed in order to take pictures in the dimly lit houses. The final learning he brought with him was the ability to shoot at 1/30th of a second hand held with the camera on his knee. This allowed him to look at his hosts in their eyes while taking their picture using a SLR camera (with a TLR this would have been easier for him).

This is why his gear, and his time to learn how to use it on his "Gypsies" project was critical to his development and allowing this image to be taken.  Back to this image.  He climbs up onto a roof and looks over the main street in Prague. The streets are empty as people are expecting the invasion at any time. So it is past noon and everything on the streets is empty. He takes his 25mm lens out and shoots this image.

Many people say it is his wristwatch but I doubt it.  I believe that this was the wrist of someone he was with.  If you look through a 25mm lens this sort of image would be a challenge for him to shoot his own arm. I believe it must have been someone else.

What makes this image so powerful is knowing what came after. The magic that photography has to capture a moment in the past allowing you to go back and relive it.  Here we know that the Warsaw Pact, lead by the Soviets came rolling in and overthrew the Czechoslovakian government and put up a puppet state.  We know of the peaceful resistance, we know of the students to pulled together to fight and we know the the surging of national pride that held back the might soviets for several days.  But this sliver of time was before all that.  Just before all of that. The empty streets, the watch being held up it is a picture of anticipation.  Anticipation for what is about to happen which we see as historical.

As a photographer, I look at this image and it has another meaning.  It is the picture which defines the moment of a combination of everything the photographer had learned and the moment it will all be used to capture an event in a way that no one has ever done before.  This is not an accident, this is not about being in the right place at the right time.  This is about taking everything you learned and using it to tell the story of what happened.  No one could argue against the pictures.  The soviets could not claim to have liberated a people.  Koudelka and his Exacta showed the truth.

Forget symmetry, forget composition and forget film selection, he captured what he could the only way he could.  And this image, this picture that defines anticipation was the first salvo in his fight to report the truth.