Preamble:
I love photography. I love taking pictures, developing film, printing and admiring the images that previous great photographers have taken.  A few years ago I found "The Art of Photography" on YouTube where the author, Ted Forbes, would discuss film cameras, development and photography books. He began doing a short lived series called "One Photo Deep Dive" where he would speak about a single photograph in great detail. I loved this series and kept hoping he would bring it back. This week he announced that he would start giving Lightroom tutorials which filled me with dread. I can find a million Lightroom tutorials on YouTube but the Art of Photography was a channel that was never about the digital methodology but about exploring the art itself.

The wonderful gift Mr. Forbes gave me however, is a curiosity for what makes a photograph art. I have decided to add a page to my website, giving me a small platform to continue these deep dives. The requires considerable research, however it is all done with a love of photography.

While I cannot compete with Mr. Forbes Art History knowledge and experience, I can share with you the love that he inspired and the bit of knowledge I have since gained. 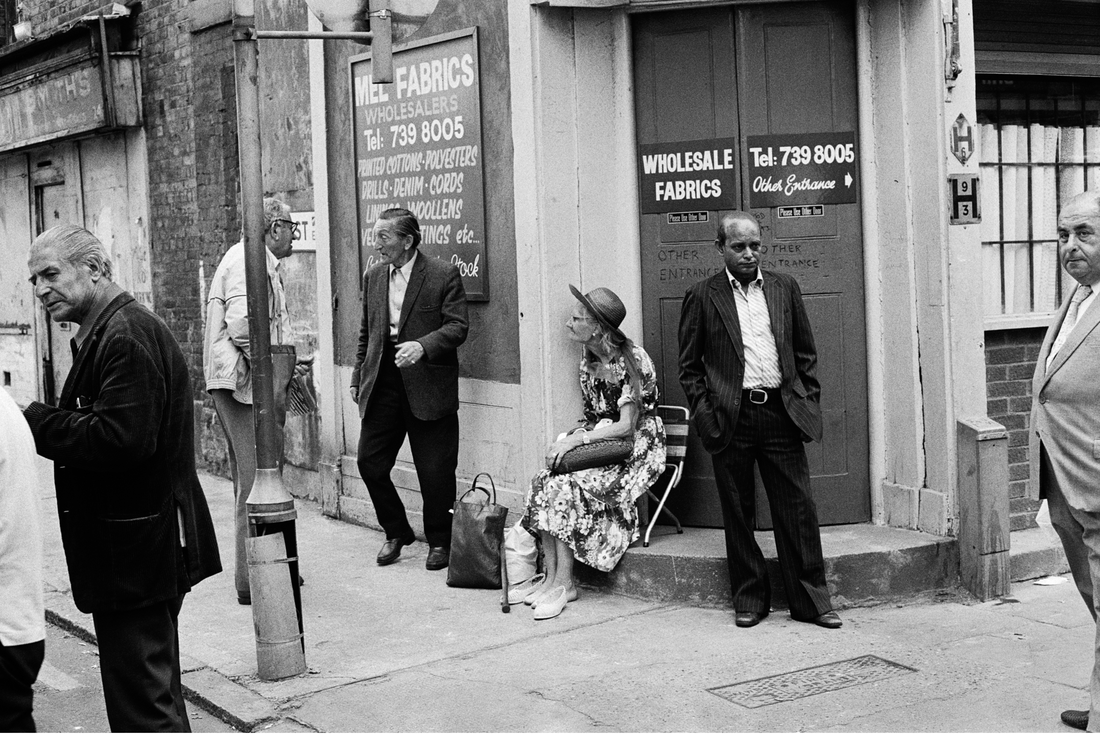 Comings and Goings: Brick Lane 1986
About the Photographer:
Colin O'Brien was a amateur photographer who began taking pictures with a box camera in his youth. He has published two of the very first images he ever took, which were of his friends in his old neighborhood of Clerkenwell (known then as 'Little Italy') near central London. He took pictures of his everyday life, his friends, neighbors and strangers on the street. His world was a working mans world which he captured through the 1950's on.  He is known for his street photography and for a series shot in the 1980's where he photographed "Travelers Children".

He photographed the ordinary life around him (his words not mine) in a very frank and honest style. He approach to his subjects didn't change from his early pictures of his friends. The subject matter did change as he grew older. In the 1950's and 60's you can see his images are shot from a protected perspective. All during the day when he is playing with his friends, or his night images are shot from the sanctuary of a window in his apartment. In the 1970's he begins shooting clubs, and musical artists who played in his local bars and clubs. His subject matter matures even further in the 1980's as he goes back to street photography but focusing on the stories behind his subjects.

I discussed a couple of his books which I purchased.  You can read about them HERE as I explain how I came to know of his work.

He was inspired by Bert Hardy & Bill Brandt both "English" photographers (Bill Brandt born in Germany) and known for their documentary style shooting.  Both managed to tell a story with a single photograph, although Hardy was known of his photo series as well.

About the Image:
This is a wide angle street photograph of a corner in London shot in an almost post-modernist style. This is not a documentary image, it is a street image that is conveying a working class scene.  Nothing is posed, there is no obvious darkroom work done (in fact the absence of one correction is very important to the image), it is respecting the straight photography code, yet it is capturing the dilapidated scene and making it ordinary.

​It is remarkable in the amount of energy it captures, with people coming and going (as the title implies) into the frame. Each person is in a different action, none looking at the same thing. There is the man on the far left, well dressed if a bit dusty looking like a mobster, speaking in earnest with a person just off the frame. We have two gentlemen behind the lamp post in the middle of a discussion. We have an older lady sitting on a folding chair with her shoes off, as if waiting for the Fabric store to open its doors. An Indian gentlemen deep in thought looking off as if waiting on someone. Finally a businessman walking into the frame on the right.

All these different people, each in their own world, moving in a different direction seems to fill the scene with energy. The curving corner could be anywhere in the world, the fading signs and the broken lamp post give a feeling of a working class area. There is even remnants of a dog's urination on the bottom right on the building.

The people and their energy make this image. The fact that it could be on any street corner makes it seem almost familiar. The gestures captured, including the man with a cigarette behind the lamp post, caught in half step, the man on the far left, in the middle of making a point and the old lady clutching her purse and looking out. The Indian gentlemen with his hands stuffed in his pockets with a thoughtful look.  So many gestures, so much movement, all captured in a single corner on a single image.
These close ups highlight the tension in the image.  The captured gestures of facial expressions, legs in mid step and the old lady's cane leaning over her shoe. Any one of these captured in an image could make the picture, but the fact that these were all captured in a single, wide angle, shot gives the image much more power.

Conclusion:
An ordinary street corner, ordinary neighbors sharing an instant, tilted frame and urban decay all gives the viewer an excuse to keep coming back to the image. It is far from a snapshot, it is an image that captures the people who inhabited this neighborhood. You can shoot hundreds of shots and never capture this descriptive of an image. Collin O'Brien did and I am thrilled to have discovered it.

These are pictures of life on an average street corner, captured by an amateur who had a day job. What I love about O'Brien's work is that it was shot by someone with family obligations, a day job and the host of everyday details that prevent us all from shooting as much as we would like. He turned this limitation into a tool by giving himself the freedom to only shoot what he was interested in. The allowed him a connection with his subjects, which while absent in this image, is a staple of his photographic legacy.

I would encourage you to look up Colin O'Brien and purchase one or two of his books.