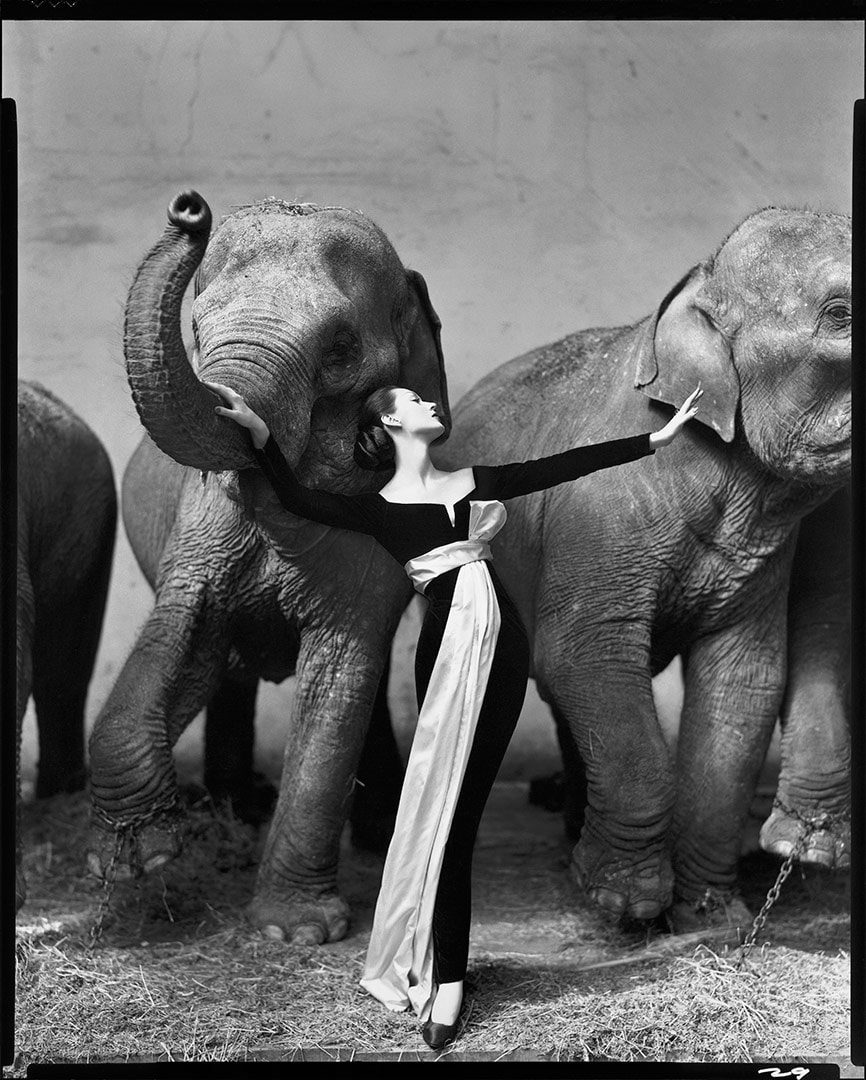 Today I will be continuing with the Image Deep Dive by looking at one of my favorite pictures of all time, Richard Avedon's Dovima with Elephants.  I love Avedon's work and have spent some time learning about his work.  I have several of his books and even a signed copy of one.  He is, like most artists, a complicated man which makes him that much more interesting to try to understand.

I am always careful, when I do an image deep dive to focus on the image at hand and not make this about interpreting a photographer through a single image they created.  It is very unfair to draw conclusions on a person by a 1/125th of a second of their life! But, as with all great work, understanding what happened in the years before the shutter was pressed and what happened in the years that followed help us develop a more intimate relationship with the image.

Richard Avedon was an American photographer best known for his commercial fashion work who commanded the highest paycheck of his generation of photographers while working for Harper's Bazaar and then Vogue.  He was born in 1923 and died in 2004 at the age of 81.  The dates of his birth and death are important only to highlight the time in which he lived, the heyday of the photography movement.  Just before he was born, photography was being introduced to the art world in a unique way by masters such as Paul Strand, Alfred Stieglitz and Edward Weston.

These masters, had successfully found the soul of a photograph and showed the world how, when done correctly, it was as powerful and moving as any form of art could aspire to be.  Avedon's challenge was not to prove that photography was art, but how he could make a living at it.  Relatively quickly he was able to do just that, with a paycheck that reached 1million a year, an unheard of figure at the time.  While he remained focused on the financial returns of his work, he shifted his thoughts to that of his legacy and a desire to be seen as an artist and not a commercial photographer.

Dovima with Elephants is a prime example of how Avedon was able to make a commercial photograph into art.  He had a keen eye for what people wanted to see, essential for a good commercial photographer, but he added a powerful emotional message to the photograph as well.  This made the work something more than a singular picture.
He selected Dovima as the model, one of his favorite at the time.  Dovima (a name made up by the first two letters of each of her names, Dorothy, Victoria & Margaret) who was herself a series of contradictions.  She was discovered on a street by a Vogue editor, and the next day was on a shoot with Irving Penn who was a sort of rival of Avedon.  But most of her work was with Avedon who used her extensively through the 1960's.  I have read that she was the highest paid model at $60 per hour (called the "dollar a minute" girl) so she was clearly sought after.

At the time, female models would work until they got married.  So most would use their position as models to gain access to the great parties and then land themselves a wealthy husband and walk away from modeling.  I am obviously generalizing here but most of the models I have read about during these times seemed to follow the same path.  Dovima did indeed quit modeling when she married but then divorced, remarried and divorced again.  This second divorce left her penniless and she moved back in with her parents and ended up working as a hostess in a Pizza restaurant.  In the Avedon biography it said that she hung this picture in the rest area in the back of the restaurant.

Here is one of Avedon's contradictions that in spite of their long working relationship, in spite of his well documented generosity to help friends of his he did not help Dovima out in any way that I have been able to see.  Gifting her a few of his photographs would have been able to help her substantially.  This leads me to believe, but have never found any evidence, that something soured their relationship.

The Art Angle:
One interpretation of this image that I have read is that like with all of Avedon's work, this image is about the stresses of old age and how they impact the person (Photos that changed the world Phaidon see HERE).  While I do see this theme in some of Avedon's work I believe it is an over simplification of what he was trying to transmit.  I believe this image he wanted to create a beauty and the beast approach and capture a gesture that would blend in with the scene but then he wanted it to stand out through the juxtaposition of Dovima's smooth, white skin versus the rough grey skin of the elephant.
Here I must highlight the attention to detail given by Avdedon.  Had her face broken from the ear of the elephant, in other words had she been positioned three inches more the the right, her face would overlap into the light grey background and would have been ruined.  This positioning was achieved by Richard moving (remember this was shot by an 8x10 full frame camera so it was a slow setup) to his right to keep her face within the background of the elephant's head.

Now we see the main gesture that I love.  The arm, extended as it is, is as if she is mimicking a trunk of her own.  Her head held high, eyes closed, makes it appear as a ballet movement.  It is delicate, it is sophisticated, it is regal.  It is beauty compared to the beast of the elephants. Her smooth throat is highlighted again by being the brightest spot on the image, and is neckless free.  There is nothing to distract the viewer's eye from seeing the wonderful lines of her neck and the contrast with the dress and elephants.

I believe here we see Dovima's experience showing through.  Had she put her hand in a flat manner we would have seen very little of it.  The slight separation of her fingers gives us a fuller silhouette of her hand the just works perfectly.  The kick up of her hand mimics her upturned nose and face. The line of the dress is perfectly seen compared to the grey skin drawing the viewers attention back to the dress.

And the final product is one of the most iconic commercial photographs of all time.  The parallel lines between Dovima's body and that of the elephants, the perfect gesture of the arms and hands to guide the viewers attention and to mimic the scene, the placement of the feet and the wonderful sash agains the black dress makes this image all about the dress and yet not about the dress.

And this is what Avedon did to Commercial fashion photography.  He converted it into art, challenging the boundaries of the genres and creating something that transmits emotion, and a message of grace and elegance as well has highlighting the power and beauty of the dress.  The masters that pushed photography to art would have been impressed with what Avedon was able to do.
Powered by